This report contains the changes of the 0.2140 update.

Here is the latest update; and the last of this year, this one is almost exclusively to the Jaguar.

The jaguar is a ground attack aircraft, a role which only a few aircrafts have in the game.
Out of all possible options, the Jaguar was the one added due for being an aircraft somewhat less popular than some other options. This is criteria is to balance the popularity, because the next aircrafts will be very well known.

Also in this update, as it is starting to be tradition, when a new type of aircraft it is added, all the relevant variants are developed simultaneously with a special interest in adding obscure variants.
Regarding to the excessive selection of variants the game already offers, some players suggested the addition of an in-game encyclopedia, that idea is very welcome and definitely is something to be added in the future.

Another note, this is something that most of you are already aware, every model in the game, especially the aircrafts, are made with an immense attention to detail to be as accurate as possible to the real representation, however, please be aware that sometimes do to the lack of public information some models may not be 100% accurate (especially in those obscure variants, where sometimes the only available information is sometimes only one small picture.).

With all that said, lest start with the first variant, the Br.121:

This aircraft was a concept to fit the role of a combat trainer. This design that later was utilized as a baseline for the development of the jaguar.

The Br.121 was never produced, but it was expected to be is a aircraft with modest capabilities, aesthetically it shares several similarities with the two seated versions of the jaguar, whoever the Br.121 features a sleeker design and have different gun placement.

This is the first version for the Jaguar, this version was actually built, but it was only produced in very small numbers.

This was also the first flown version of the Jaguar and it was before developing in the divergent versions of the A and GR1.
This variant is very close to de final mass production version, but still lacks in some details like the ventral fins and it has weaker engines.
In comparison to the Br.121, the Jaguar turn out to be a more ambitious design capable of performing strike missions as well as other ground attack operations.

Now the Jaguar A, is the first mass production version along with the GR.1

The Jaguar A already has the consolidated design that was used all the other versions.

The Jaguar A (Appui) like all other variants, doesn’t have any active radar, but it is excellent aircrafts for low interdiction aircraft and especially effective with precision bombing.
This version of the Jaguar A is the late version, as it already has laser rangefinder placed below the nose and improved engines.

The Jaguar M is a prototype version to be used in aircraft carriers . 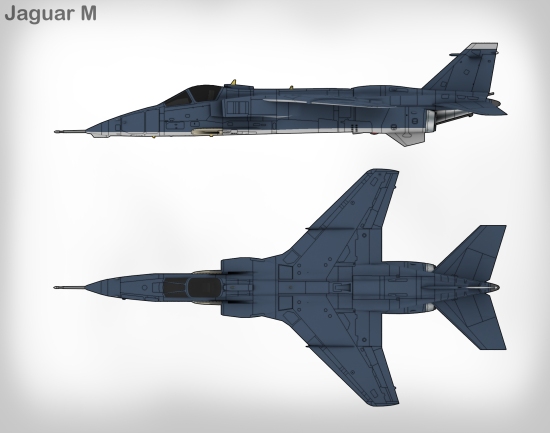 The Jaguar M (Marine) was a variant that never went to full production, the changes in this navalised versions have little impact visually an it performance and role is very similar to the A version.

The Jaguar E is developed from the A version to be a combat Trainer as a main role but it still retains strike capabilities as a secondary role.

Jaguar E (Ecole) has reduced avionics compared to the A version. 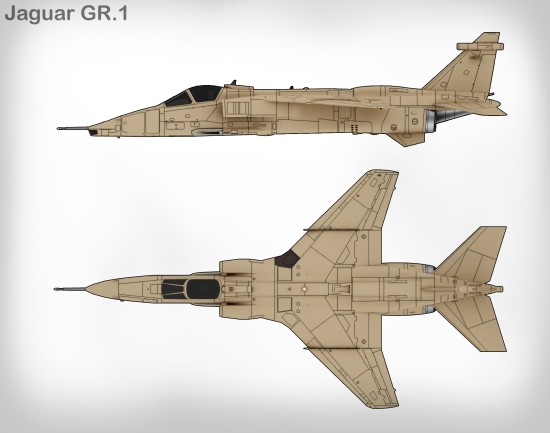 Like the A variant, the GR.1 is a Single-seat all-weather tactical strike, ground-attack fighter.
However in comparison to the other version it has different engines and cannons. It can be easily distinguished thanks to the shape of the nose.
This variant as well as the other GR variants have the unusual ability of having over the wing pylons, it also has different avionics suit that are more capable than the A version, however it has far less emphasis in precision guided munitions.

The Jaguar GR.1A is an electronic upgrade from the GR.1 version.

Along with the avionics updates, this version can use the latest versions of the sidewinder missiles.

The Jaguar GR.3 is another step forward in improving the avionics of the previous version.

It has hardly any noticeable visual characteristic to help distinguish it from the earlier versions, so it his very hard to tell them apart.

The Jaguar GR.3A is the last technological update to the GR line of the jaguar. 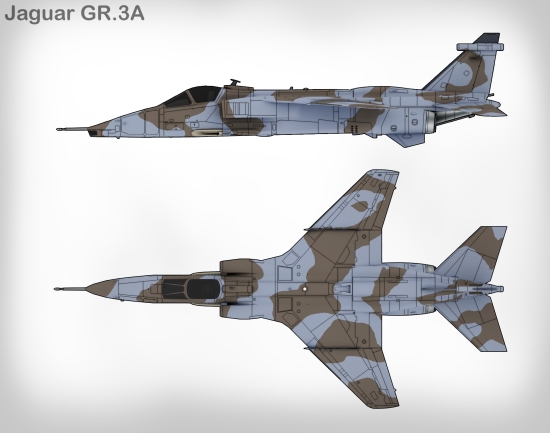 The Jaguar T.2 (Trainer Mark 2) also previously known as Jaguar B (Biplace) is the two seater trainer version derived from the GR.1 version.

Visually almost identical to the E variant however it only has one cannon, the one placed in the lefty side and the T.2 it is not regarded as combat capable as it is the E variant

The final improvement in the Jaguar T.2. 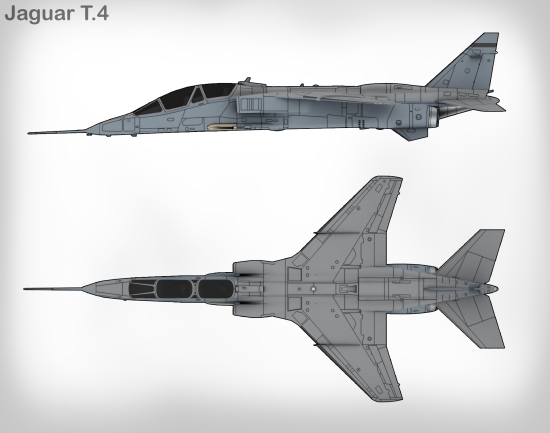 The jaguar T.4 is still a combat trainer, but it has the same avionics as the GR.3A.

And finally, to end with an experimental prototype.

The jaguar ACT is experimental version for the development of the Eurofighter typhoon, it has less stability but it is more agile thanks to the fly-by-wire electronics.

And that’s all for the jaguar.

Like what happened before, not all this variants will be added in this update, some will be only added with the future updates.

And as final note regarding to the jaguar, because the (Mitsubishi) T-2 and F-1 are very similar to this aircraft, they will be treated as if they were variants. So it is very likely that added in the near future between other updates.

Now as the aircrafts are done, the next additions is the weapons for the jaguar:

The R.550 Magic 1 it has a similar role to the sidewinder, this is a close range missile suited for dogfights.

The R.550 magic 2 is the improved version with better homing capabilities. 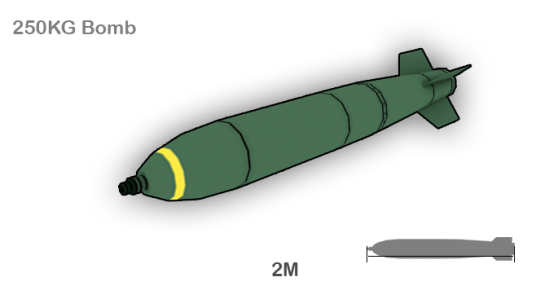 The 250Kg bomb is similar to the MK-82 and it was designed to be used against non-reinforced structures.

As-30 is a medium range air to ground missile, this missile is supposed to be manually controlled by the pilot, but because such ability it is not yes present in the game it will behave like a semi-active missile. 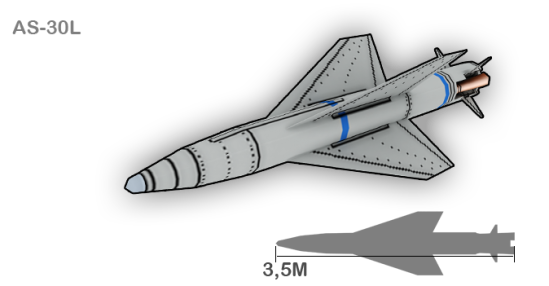 The AS-30L is a laser guided variant and it is a highly accurate missile.

The AS-37 is the radar seeker version of the AJ-168 Martel. Being a passive radar guided it can only lock to targets with an active radar such as ships an radar domes

These are just some of the weapons that the Jaguar can use; expect in the future more weapons and the possibility of the jaguar’s loadouts being revised.

As an extra, here are two new variants for the Su-27:

Also something to take note, the Su-33’s canards are not meant to add extra agility, instead they are always oriented toward the air flow.
Currently these moving parts are disabled.

This version is the evolution after the Su-37, while it doesn’t have any canards it still a highly maneuverable aircraft that’s to the TVC engines 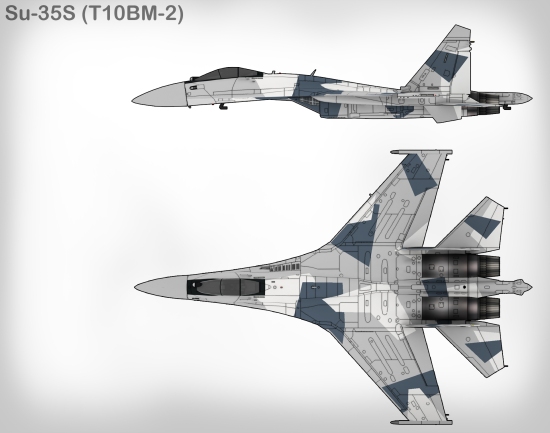 This version of the Su-35S, the T10BM-2 is the last prototype version before the mass production. It is also the one of the most technological advanced aircrafts in the game.
I challenge everyone to play with this aircraft in “DoppelgangerBattle” and try to stay alive for more than one minute.

There are other variants that have requested before, but have not yet been addressed; some of them are the Su-30, F-16XL and YA-10B.
They will take priority over other variants, but as it has been mentioned in the last reports, the next improvements will be more oriented toward the development of the game editors, so these aircrafts may take a bit more time to be added.

As for the next steps in the schedule, the following update it will be the map editor and after that it will be the mission editor.
As soon those editors are completed, they will be used for the creation of the new campaign that is already being planned.

And finally as a closing note, the last reports were frequently delayed, this is something that could be improved in future updates, however sometimes due to the nature of the update, is practically impossible to break that update in small releases.
But another solution came to mind, there are still some F-104 variants that are not yet in the game, and now that group is bigger thanks to the Jaguar variants that will not be immediately added in this update. This is something that can be useful, the solution to avoid the time without an update be longer than a week, is whenever a new update is unable to be released at the expected time it will be released a small update with some of those aircrafts and any required bug fixes and if possible some extras.
This way, all of you will have something new to play with while waiting for the next update. But, if anyone has any better idea to organize the updates to avoid delays are welcome to share it. 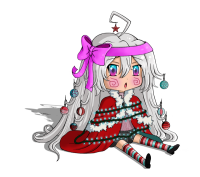