This report contains the 0.199 updates.

Fortunately this update took less time than expected.
The skirmish mode has been added including other additions.This mode for now only offers the basic options and the Deathmatch and Team Deathmatch modesA quick tip how to use skirmish mode: 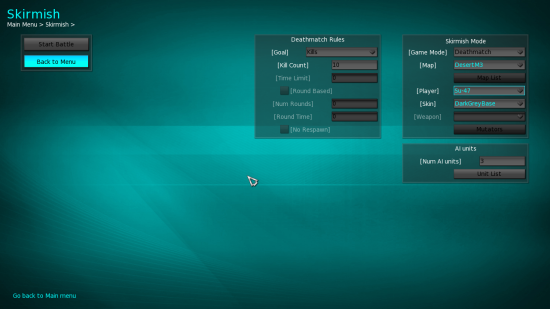 You can select map, your unit and skin.There are some options not yet available, but you can control what type of goal you want.

It is possible to select, kills, hits, score and damage.In this version, it is not possible to set the AI players to fight for the goal, so no leaderboards for now.
But considering the variety of units available, it was added a helpful option so filter the units that the AI players can use: 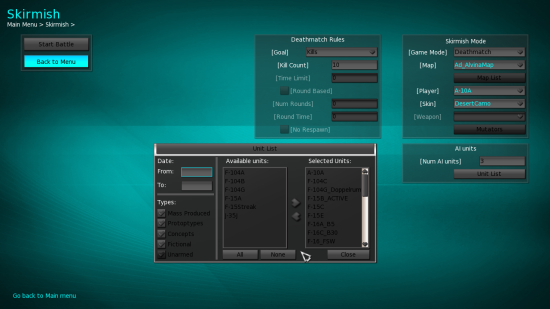 With this window you can easily select the playable units.In the left there are some filters to help narrowing down the selection.

In the right are the units selected, at the left are the units available that follow the filter conditions.Just double click in a unit to select/unselect.
Other addition was radio communications for enemies and allies.This system is mostly done, however the radio voices are still test samples and they don’t have the desired variety.

(For anyone interested, there are controlled in the Data02.txt in the System folder)

You can hear them in the following video.
The last addition came from playing the Skirmish mode, the matches were great, but there was something lacking.

The AI players were perceptive and reactive, but still…
After looking carefully, the problem was obvious, their attacks were lacking.
Like other air combat games, the AI players normally only fire one missile at the time, while the player can use everything at his disposable.

That behavior obviously results in a handicapped AI player that can hardly be an even match to experienced players without resorting to cheats.
So changes were made.
Now the AI can use everything at his disposable, just like the player.But don’t worry, there is no cheating, tthey were not taught to be efficient, they were taught to be players.
Here is the result:

Inherent to these changes, the AI players have become a lot more chalenging, so don’t treat them lightly!
The impact of these changes in the campaign are still being measured and if necessary, they will suffer some tweaking for lower difficulties

One Reply to “Report 024: Skirmish Mode”