This report contains the 0.194 update.

A note must be added before showing the newest additions.
There were several issues reported from the players, one most noticeable was the “campain” typo that plagued the whole game.
Most of this issues were resolved with this update, including a bug that caused the game to crash after replaying with an aircraft with an extra equipment attached (like the f-16C with AGM-88 and target pod)
With this, the game is now more solid and after that it wasn’t found any other bug that causes the game to crash. (However, it may happen when the user sets wrong parameters when modding)

And now the report, first with the addition of vegetation:

A view from above: 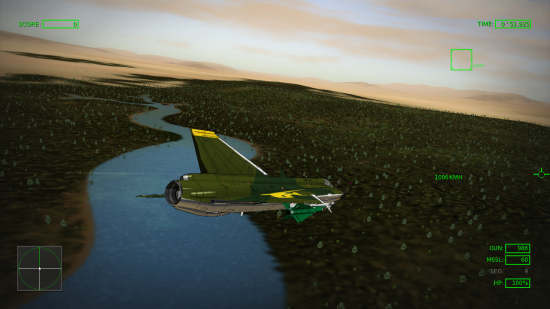 (In this version, the flora is generic; but it will be more faithful to the surrounding environment in future versions)

Before this addition, it was only possible to place trees by hand, one by one.
Covering a large area that way would have been madness.
This issue could be easy resolved with a map editor, however such editor it isn’t available for now, so another solution came out.

Developing a system where the user can specify limited areas where the vegetation will be placed and when the level starts, the parameters are read and CPU place the vegetation accordingly.
It’s simple and effective; however it does not prevent the trees from being placed in water or other undesirable surfaces.
To prevent that, was added another condition , by defining which collision model in the map can be placed vegetation allows a more precise control defining the area that will be covered.

For that it was detached the surface from the ground collision model corresponding to the area where the vegetation will be placed: 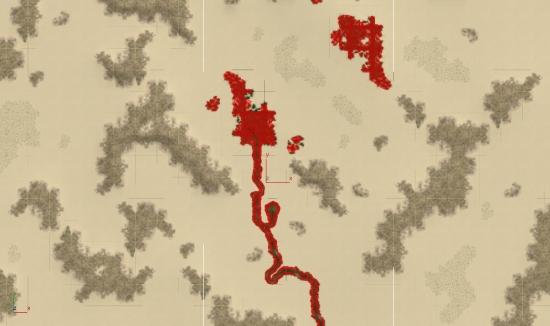 It worked fine, however when covering a large area it may take several minutes (in the current maps, the playable area is approximately 1 000 000 000 square meters). But waiting for that long every time the map is loaded is unacceptable!
To fix that, it was added a system that only requires the placement of the trees to be generated only once, and after that, it saves the data to an external file that will be used to read the trees locations in future loadings.
With this system, after the tree data is generated, over 10 000 000 trees can be read almost instantaneously.

When the editor becomes available this system will probably be upgraded, but for now it will suffice.

The presence of trees can be irrelevant in the heat of an aerial battle, but it does give a nice feel to it when flying close to the ground.
Also it helps the player achieving a better sense of scale of the whole map.

Another relevant addition is the newer possibility of applying vertical limits to the blast radius.

This image helps visualize that effect:

With this, it will be possible to recreate those missions where the payer has to quickly climb/descend to certain altitude to escape the blast.

A screenshot showing the first super weapon to be added in the game:

This weapon it isn’t used by any aircraft by default. It is “hidden” in the game folders, to be used it must be linked to an aircraft first.

By the way, a sneak peak of the next report:

Can you identify what aircraft is this?