After a succession of requests from various users asking for the cockpit view, it was clear that this view would definitely had to be available immediately in the first release.
So this week was focused only towards the development of this view. 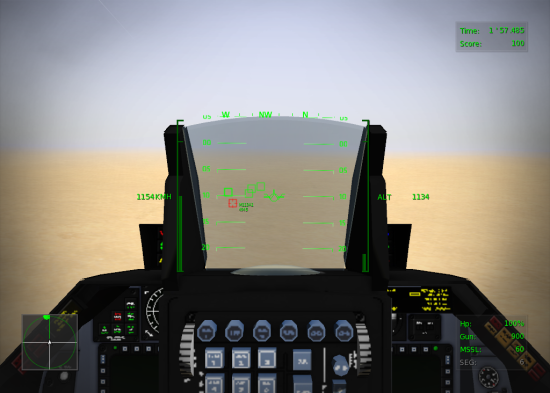 For now, only the F-16 has cockpit view, but the other aircrafts and following additions will have their respective cockpits as quickly as possible.

There is also the possibility to add a fourth view, another cockpit view, but more distant to the panels thus having a more clear view of the soundings

It’s still possible to look around in the cockpit view:

The main reason of the release being delayed up this point, was to be able to offer a game that even in the first alpha release has already the main key elements implemented.
In the current version, it is possible to make/play campaigns from start to end as well as adding any kind of user made content.

This was to reduce the risk of the alpha supporters, a game fully playable without the supporters having to wait weeks or months for main gameplay elements to be implemented.

(Until the alpha is released more content and features may be added, so the official list will only be available in the day of the release)

Highest priority (things that likely be available in the next weeks after the alpha release):

(Note that small additions or improvements are not listed here, for example, redesigning de menu/huds)

The list above is what’s expected to be added in the game. It is not listed in order of implementation and lower priority elements may be added before the highest being completely cleared.
Also, most of this list is expected to be implemented in a year of deployment regardless how successful the alpha funding may turn out to be.

In case of a successful alpha funding, more production values will be added to the deployment allowing faster content & features development, with the possibility of expanding the game beyond what its listed here.

The goal, is to make this game as a reference for arcade flight sims on the PC, but there is a will to be more than that, another goal is to make a full warfare engine capable of delivering mods such as space battles of epic scale or fast paced robot action with little to no effort required from the mod makers.