With the latest weapon additions, our aircrafts developed an overwhelming advantage against ground forces.
So, in our ground operations exercise, there wasn’t any real threat to the air units. To balance that issue, we started to deploy Self-propelled anti-aircrafts guns.

A tracked vehicle mounted with an AA gun operated by an optical fire control system.

Although not heavy armored, it is a reliable weapon against low flying aircrafts. The Sidam 25 is a complete turret unit, with four 22mm Oerlikon-Contraves cannon, optical sights, low-light video sights, laser rangefinder and fire control computer. This fitted into the rood of a standard M113 APC.

Only protected from small arms fire

As previously mentioned, the Sidam 25 use the M113 as base model. So it was not wasted the opportunity of also deploying the M113 unit:

The M113 is an armored personnel carrier, it is highly mobile but lack protection and reliability. Still, it is a very versatile vehicle and served as a chassis for a wide variety specialist versions. 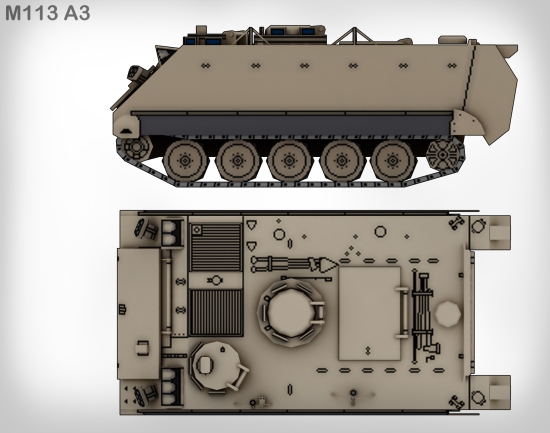 This version is the A3, comparing to other versions, it includes external fuel tanks, spall liners, steering yoke and more powerful engine.

It is easily identified by the large fuel tanks on each side of the rear ramp.

(Note: for now, in game there is no actual usefulness for unarmed APCs, they only serve as moving targets)

Chassis adaptable to many roles

Cannot keep up with tanks

The addition of the Sidam was sufficient for now, however, after browsing the list of other units that use the M113 as a base model. We took the opportunity to request the deployment of another AA gun for or Close air support trainings:

The M163 is a M113 fitted with a six barrel Gatling gun similar to that is used for the F-16 fighter aircraft.

Also known as the Vulcan Air Defense System (VADS), the effectiveness against air units is somewhat smaller compared to the Sidam, despite that, it can be a good unit against soft skinned ground targets

After playing a lot with high explosives and thermobaric weapons, our pilots requested other types of warheads.

Their request was already in our schedule, and weapons with incendiary type of warheads were promptly added to their disposal:

The first incendiary weapon added was the BLU-27B, it is napalm bomb that spreads the fire to a wide range.

The MK-77 is a newer kind of incendiary tank to replace the napalm bombs. The lack stabilizing fins makes it acquire a tumbling motion on being dropped that contributes to the scattering of the combustible gel over a long line.
Currently for:
A-10A
F-15E

The ZB-500PT is an incendiary tank, and the small stabilizers fins don’t prevent it to acquire the tumbling motion like the Mk-77, causing the desirable long line of fire.